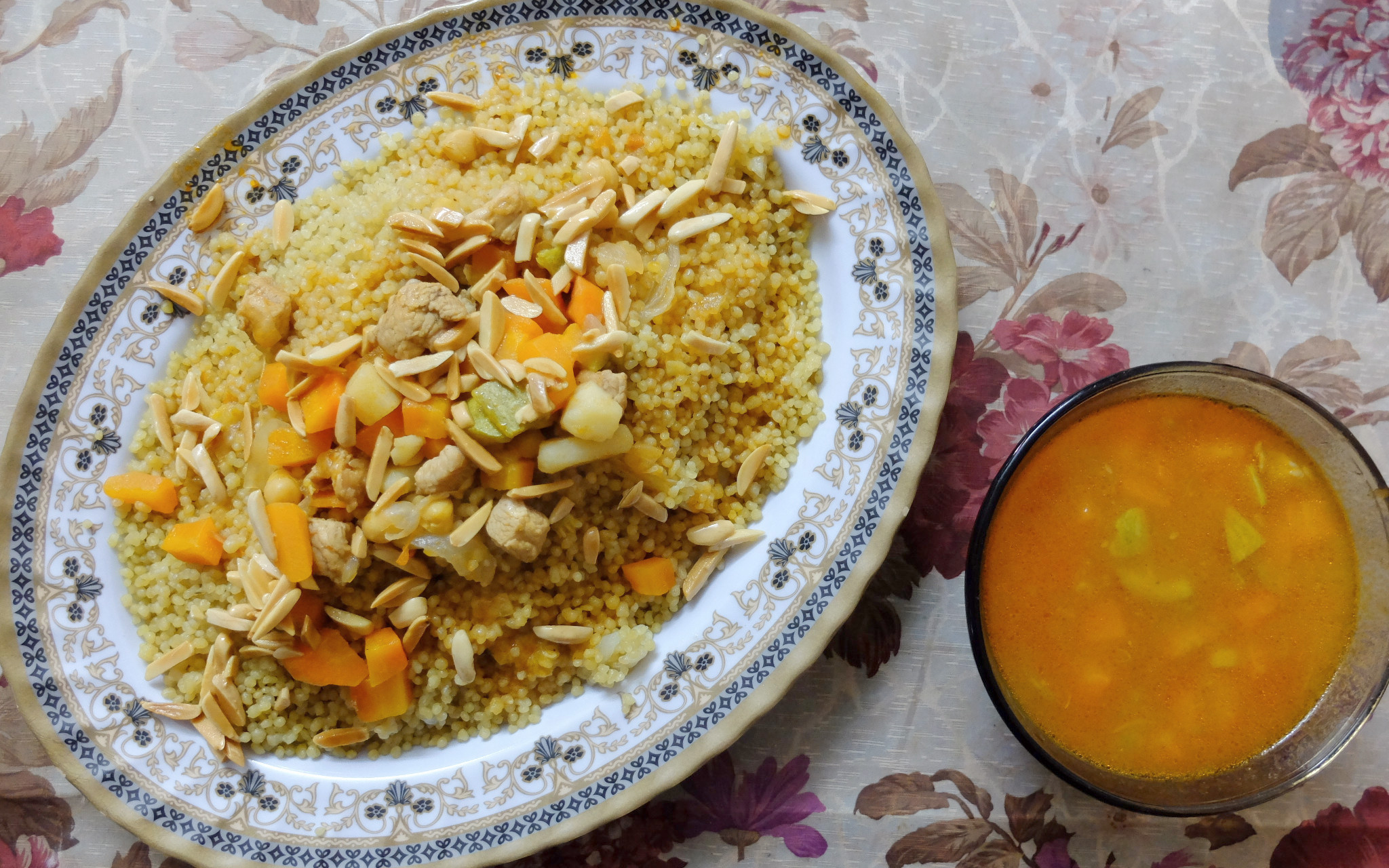 Maftoul is an old traditional dish from Palestine, and the surrounding region in general, including Lebanon and Syria. Maftoul is the name of the couscous used in this recipe, which derives from the original North African couscous, but made with bulgur and wheat instead of semolina. It's likely that the dish was brought by migrants who came to Palestine from Morocco, when it was then changed to what is the Palestinian version. Palestinian couscous is also bigger and slightly darker than the North African couscous. It is cooked in a similar way, over a stock with lots of vegetables and sometimes meat. It’s a perfect winter dish, hearty and comforting, and full of warming spices.

These days in Palestine, many people will buy read-made maftoul, and it’s quite rare to find people who still make their own by hand. But the homemade maftoul is so much nicer than the factory one, and the process of rolling these little balls tells many stories of Palestinian food and social customs, where women sit together and prepare the maftoul for hours, sharing stories and memories.

I was lucky to see the maftoul made by hand by Fatima, the aunt of my friend Suha, in Wad Rahhal near Bethlehem (see their story here). Fayda, Suha’s mother, then cooked the maftoul over delicious stock and served it with chicken and lots of vegetables. The recipe below is made with dried Palestinian maftoul, which can often be found in Middle Eastern shops or even online (in Brussels I found fairtrade Palestinian maftoul at La Porte de la Tortue). If you want to learn how to make the maftoul yourself, check out this blog) from Kitchen of Palestine.

Fatima learnt how to make maftoul from her mother, who learnt it from her own mother. Fayda, Suha and I listened to Fatima when she explained how to make the maftoul and we watched when she expertly rolled the bulgur with flour and some water to form small balls. Fayda’s mother didn’t know how to make maftoul so Fayda never learnt how to prepare it from scratch, and nor did Suha. Suha told me that that they buy it in the supermarket, but this fresh handmade version is much better. “Not many people know how to do it, it’s a very old practice”, Suha explained.

To make Palestinian maftoul, you’ll need a couscous pot or a steamer pan (see description below) as you will be steaming the maftoul over the stock and not inside it. It looks like a long list of ingredients but it’s actually quite easy to make, unless you decide to make the maftoul from scratch. I also added chickpeas to Fayda’s original recipe, so you can also easily make the dish vegan, simply by leaving out the chicken. The two versions are included in the steps below.

You’ll need a couscous pot or a steamer pan (with different levels) as you will be steaming the maftoul. A couscous pot is usually made up of a large saucepan as a base in which you stew the vegetables and meats in stock, and a smaller saucepan that fits neatly into the larger pan with small holes in its base so you can steam the couscous grain over the stock.

Spice mix for the stock

Sauce for the chicken

As with many dishes in Palestine, it’s nice to accompany the maftoul with some plain yogurt and some arabic salad.